We invite you to participate in our dissemination conference presenting conclusions of the project 14-15 July 2022, Brussels, Belgium

Link to the conference registration

HyTunnel-CS consortium is delighted to announce the dissemination conference which will take place in-person 14-15 July 2022 in Brussels, Belgium.  The conference will mark end of the project and will present the major public outputs of the project:

Attending the conference will also provide an opportunity to familiarise with other research aspects and conclusions including:

Registration is now open and we are waiting for your participation

Link to the conference programme

The HyTunnel-CS project developed further the conceived at Ulster University the breakthrough safety technology of explosion free in a fire self-venting hydrogen storage tank without thermally activated pressure relief device (TPRD-less tank). Such tank excludes catastrophic consequences of hydrogen tank rupture in the open space and confined space like tunnel or underground parking. No blast wave, no fireball, no projectiles, no life and property loss. The invention is based on the microleak-no-burst (μLNB) concept. The invention was nominated for the best innovation award in 2021 by Fuel Cell Hydrogen Joint Undertakinig (now operating as Clean Hydrogen Joint Undertaking). It is licensed to the USA. The μLNB tank prototypes with different fibres, resins and liners were successfully tested in fires of different intensity. When in a fire, the melting of liner in the self-venting tank causes numerous microleaks through the composite wall, which is non-hydrogen-tight, thus preventing tank from a rupture. The microleaks could generate only microflames, therefore the technology does not imply hazard distances. The technology validation experiments with 70 MPa self-venting tank prototypes designed by Ulster University are part of the validation experimental programme of partners HSE (UK), CEA (France) and USN (Norway). The partner HSE is testing the performance of a prototype against impinging hydrogen jet fire. The fire testing of other prototypes by partner CEA was already carried out at characteristic for diesel/gasoline fire intensity of 1 MW/m2 using propane gas burner, where the effect of fibre in the composite wall and the effect of fire termination conditions on tank performance were studied. The partner USN is conducting a series of tests where the effect of different liner materials and fibres will be investigated, including in conditions of fire extinction by the water sprinklers to imitate firefighters’ intervention. It is expected that microleaks will continue after fire extinction and hydrogen concentration will decay below the lower flammability limit of 4% of hydrogen in the air in the vicinity of the tank wall. The example of 70 MPa self-venting tank prototype performance in a fire during the test at CEA is presented in the Figure below. 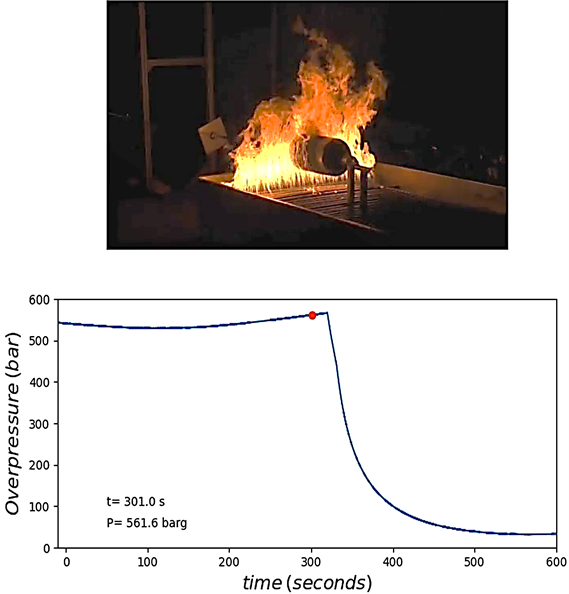 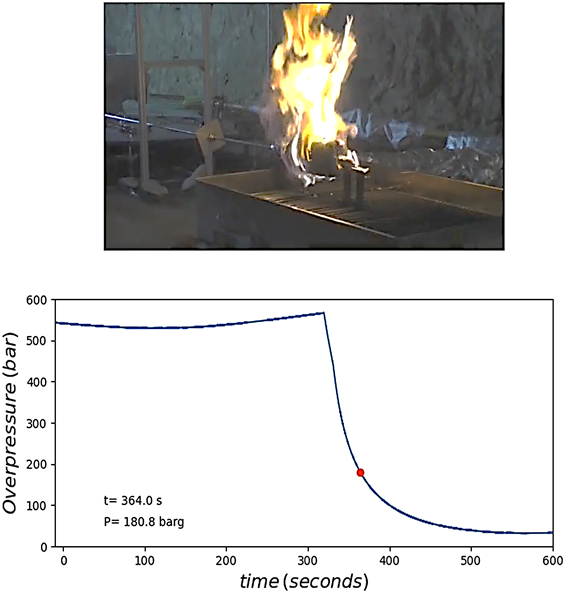 Performance of 70 MPa μLNB tank prototype in a localised fire of 1 MW/m2 with pressure transients inside the tank: (a) – before the leak start, (b) – after the leak start and fuel supply from the propane burner is terminated (resin combustion that could be assisted by hydrogen microleaks is seen).

Development of a vertical jet fire from hydrogen storage with orifice diameter 2 mm and initial pressure 700 bar in presence of a burner. Experimental test performed by CEA.

A further experimental campaign gave insights into the blast wave and fireball dynamics following rupture of a high-pressure hydrogen storage tank in a real tunnel: 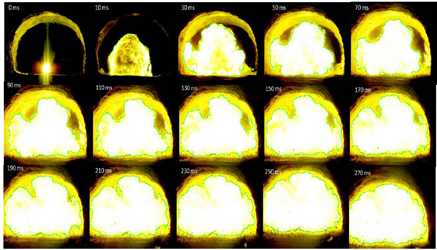 Fireball development in a tunnel. Experimental test performed by CEA.

Have a glance at HyTunnel-CS modelling capabilities

CFD simulations of jet fires in underground car park: effect of TPRD diameter on size and height of hot combustion products cloud, TPRD orientation downward and at 45° to vertical.

Stay tuned on the progress of HyTunnel-CS experiments!

HSE and DTU are currently conducting experiments to investigate the effect of hydrogen jet fires on the erosion of tunnel road and lining materials. Test results will provide essential information on the potential structural degradation and concrete spalling for real scale hydrogen jet fires with storage pressure up to 700 bar. Advanced examining techniques are being employed to assess the extent of damage on test samples, e.g. the laser scan analysis demonstrated in the Figure below. 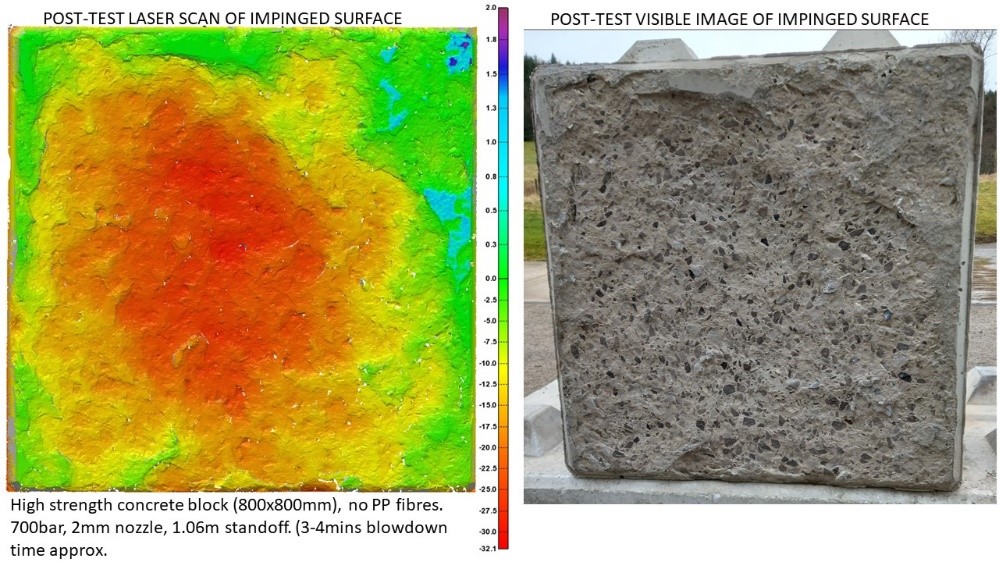 Analysis of the damage extent from a hydrogen jet fire on concrete sample without polypropylene fibres. HSE Test.

The extensive knowledge and scientific findings generated within HyTunnel-CS are available through different means including:

The scientific findings obtained in HyTunnel-CS were used to formulate harmonized recommendations for the emergency services on the response, intervention strategies and tactics for hydrogen incidents in tunnels and confined spaces. The recommendations take into account the possibilities and limitations of intervention by fire and rescue services (FRS) today. The main highlights and conclusions include, but are not limited, to the following: 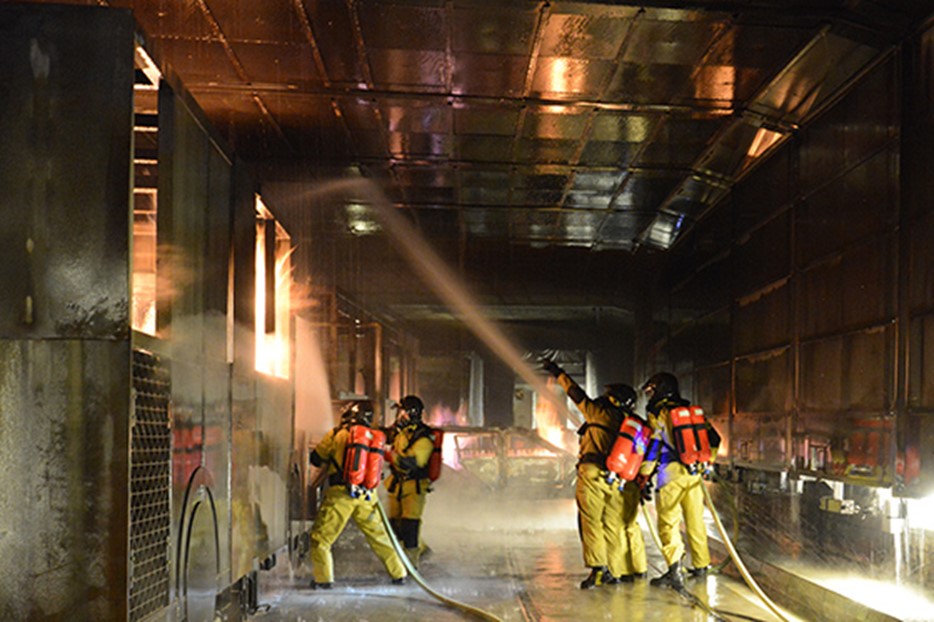